A Christmas Carol: A Local Treat For The Holidays in Princeton, NJ...

Our favorite holiday show pairs up year after year (for 16 years to be exact) with our favorite local theater. Unfortunately, this year is its last. Charles Dickens' timeless tale, A Christmas Carol, at the McCarter Theatre Center in Princeton, New Jersey, will take its final bow. Make no mistake, you will feel like you are at a full-blown Broadway show, with wonderful sets and an incredibly talented group of actors, young and old. Next year you will see a reimagined product of this classic. 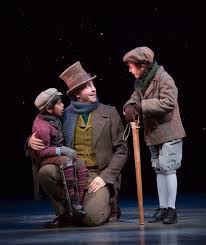 The McCarter Theatre Center’s production of Charles Dickens' A Christmas Carol has become a welcome holiday treat for families across the region. This heartwarming and powerfully honest musical adaptation of Dickens' classic novel is a wonderful way to honor tradition while experiencing the joys and warmth of a holiday favorite. A Christmas Carol runs from Dec. 4 through Dec. 27 on the Matthews Stage.


McCarter’s production of A Christmas Carol has welcomed generations of local families, introducing young members of our community to the joys of live theater every year. After 16 seasons, the current classic production will be retired in preparation for a reimagined version, now in development, to debut in 2016. McCarter welcomes all to return to McCarter and enjoy this production one final time.

McCarter Theatre Center produces A Christmas Carol every holiday season, dating back to 1980. This current version, which premiered in 2000, and is the third adaptation of Dickens’ tale to grace the Matthews Stage.

BACKGROUND
Ebenezer Scrooge (Graeme Malcolm) is not a fan of Christmas, not one bit. He relentlessly "Bah, Humbugs" every glimmer of holiday happiness. Cheer is costly and good-will is bad for business. This Christmas, however, things are going to be a little different. Ebenezer experiences a change of heart while traveling through his past, present and future on Christmas Eve. Scrooge’s miraculous transformation opens his eyes and his heart to the things that are truly important. 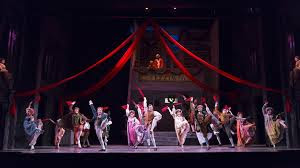 A McCarter Theatre Center tradition, A Christmas Carol is a perfect excuse for families to unplug from the usual hustle and bustle and enjoy a production called “a must-see” by The New York Times.

Ever since its publication in 1843, Charles Dickens’ A Christmas Carol has come to embody everything that is good and right about the human spirit not only during the holidays, but all throughout the year. A Christmas Carol remains a timeless tale of redemption, hope, and love.

The evergreen nature of Dickens story comes to life through its reintroduction to each new generation, and this quality is writ large on the McCarter stage through David Thompson’s skillful adaptation. Thompson, whose credits include the libretto for Kander and Ebb’s Tony Award-nominated Scottsboro Boys, knows a thing or two about giving a fresh perspective to classic works, having created the new script adaptation for the current revival of Chicago, the longest running American musical in history.

At the helm of this year’s holiday ghost tale is Director Michael Unger, returning for his 18th trip to 1840s England. Unger’s vision for the production has resulted in a story closer to Dickens’ original intent, without the sugarcoating found in so many other versions.

At its core, A Christmas Carol is about experiencing all ranges of human emotion. According to Mr. Unger, “The tools of Scrooge’s redemption, as with ours, lay around us, if we just know how to pick them up and use them.” Mr. Unger’s deft direction is complemented by an original score from composer Michael Starobin, whose accolades include Tony Awards in 2004 and 2009 for his orchestrations of Assassins and Next to Normal.

The talents seen onstage are skillfully matched by those behind the scenes. The McCarter welcomes back Musical Director Charles Sundquist, returning for his 24th production of A Christmas Carol. Mr. Sundquist is joined by Tony Award-winning (Thoroughly Modern Millie) Choreographer Rob Ashford, Lighting Designer Stephen Strawbridge, Costume Designer Jess Goldstein, Sound Designer Brian Ronan, and Set Designer Ming Cho Lee, whose career has spanned more than 50 years and includes a bevy of major awards including the Tony Award and the National Medal of Arts.

At the center of the production is Broadway veteran Graeme Malcolm as Ebenezer Scrooge. Mr. Malcolm’s turn as Dickens’ famous miser has been described by The Star Ledger as "one of the best Ebenezer Scrooges that McCarter has seen.”

About McCarter Theatre Center:
Under the leadership of Artistic Director Emily Mann and Managing Director Timothy J. Shields, McCarter Theatre Center is one of America’s leading regional theatres and is the only organization in this country that is a professional producing theater while simultaneously presenting major performing artists. World premieres include Vanya and Sonia and Masha and Spike (2013 Tony Award, Best Play), Miss Witherspoon; The Brother/Sister Plays; Me, Myself & I; Having Our Say and The Convert. Other plays include Broadway productions of Translations; Anna in the Tropics (Pulitzer Prize); and Electra. McCarter presents artists such as Lang Lang, Dance Theatre of Harlem, Wynton Marsalis, David Sedaris and more. Our education/outreach efforts serve tens of thousands through student matinees, in-school residencies, and adult education classes. McCarter is supported by Princeton University, the New Jersey State Council on the Arts, many corporations and foundations, and from more than 3,000 individuals.


THE CAST (in alphabetical order)

A Christmas Carol runs December 4 - 27 in the Matthews Theatre. Single tickets for The Understudy start as low as $25 and are on sale now online at mccarter.org, by phone at (609) 258-2787, or in person at the McCarter Theatre Ticket Office, located at 91 University Place in Princeton.