Kryptonite Locks And Lights: You Shouldn't Own A Bike Without Them... 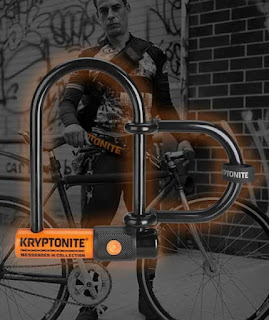 Over 40 years ago, Kryptonite began with a mission. With $1500, some ingenuity, creative security ideas, and a Volkswagen Van, Michael Zane was able to invent the first U-Lock and travel around the US spreading the message of need for bicycle security. Thus Kryptonite was born. While much has changed in bicycling, and bicycle security, their objective remains the same, and they are here to empower you to protect what you value. Through constant innovation, expert guidance, and never-ending commitment, Kryptonite will continue to pursue their passion and do everything they can to ensure you can go where you want, when you want by offering smart, serious security solutions.

A legendary test for Kryptonite’s new bicycle locks came in 1972. The Second Avenue Bicycle Shop in New York City locked a three-speed bicycle to a signpost in Greenwich Village under Kryptonite founder Michael Zane’s direction. Although all of the removable parts were immediately stripped by thieves, the bicycle itself remained for thirty days and thirty nights. The Kryptonite lock and the bike frame were still in place, even though the lock had been attacked numerous times. Publicity from this event gave Kryptonite the boost it needed, forever changing the face of bicycle security. Kryptonite stands behind its products, and gives customers an additional peace of mind. Often imitated, never duplicated.

Some interesting facts: After receiving an unusually high number of Anti-Theft Protection claims coming from the 4 zip codes in New York City in 1989, Kryptonite was forced to drop stop offering its Anti-Theft Protection Offer in this city. Not recognizing this turn of events as a loss, but a challenge, Kryptonite reinstated the offer in 1994 with the release of the New York Lock, which has become a flagship lock for the company. Twenty-two years later, Kryptonite returned to the streets of the Big Apple to test its latest innovation - The New York Lock. In April, 1994, the New York Post laid down the ultimate challenge: Could Kryptonite’s New York Lock last 48 hours on the toughest streets of New York? Michael Zane and Neil McDaid, Director, Product Development and Design, set out to prove, once again, Kryptonite was up to the test. In a city where over 100,000 bikes were stolen each year, Kryptonite and the New York Post took a brand new, bright green Univega road bike worth $600 and locked it to a parking meter in the East Village; the “Bermuda Triangle” of NY bicycle thievery. For a full 48 hours, the bike remained locked on the corner of Avenue A and 11th Street.

Publications such as Bicycling, Fortune, The Wall Street Journal, US News & World Report as well as a host of others continued to advertise Kryptonite products as the best on the market.

We also love additional versions: The New York Fahgettaboudit Mini and the New-U New York Lock Standard. They have many of Kryptonite's great features in different sizes for different needs.

Many of their locks offer flexibility/fit to maximize the number of places where it is possible to lock a bike; durability with keys that do not break and operate under heavy use; and one-lock solution for security that increases the ability to properly secure a bike without having to carry two locks.

Additionally, Gravity Line (WheelNutz and WheelBoltz) is an innovative wheel security solution that is easily installed and removed without the need for special keys. The Gravity Line harnesses the power of gravity to prevent the removal of wheels. When the bike is upright, the WheelNutz and WheelBoltz are locked and can only be unlocked with the bike turned upside down. 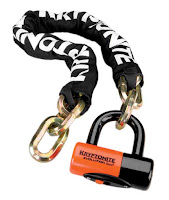 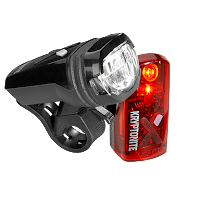 For over 40 years, Kryptonite has been your dependable, high quality Lock provider, ensuring your ride is ready to get you where you want to go. Now, let them also light your way with their street light series. Offering a complete set of usb rechargeable bicycle lights, Kryptonite will now be your dependable light provider focused on keeping.

YOUR SAFETY & SECURITY. . . THEIR PRIORITY.