LifeStraw: A Water Filtration Product That's A Lifesaver In Many Ways... 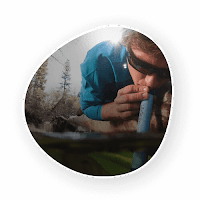 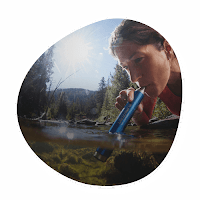 The evolution of LifeStraw has been a remarkable journey. It started in 1994 when the Carter Center approached LifeStraw’s parent company, Vestergaard, to develop a filter that could remove Guinea worm larvae from water it was contaminating. Vestergaard designed a cloth filter but then evolved it into a more effective pipe form in 1999. Today, more than 37 million LifeStraw Guinea Worm filters have contributed to the near-eradication of the disease. Inspired by the impact of the LifeStraw Guinea Worm filter, Vestergaard worked to develop a product that could filter out virtually all of the microbiological contaminants that make water unsafe to drink. The result was LifeStraw technology, introduced in 2005 as a personal “straw-like” filter. It was designed for people in developing countries who don’t have water piped in from municipal sources or other access to safe water and emergency settings following natural disasters when water is contaminated.

Vestergaard recognized that, while the LifeStraw technology was effective for many uses, innovation around product design was important to meet the needs of different groups of people. In 2008, LifeStraw technology was adapted for in-home use and the LifeStraw Family water purifier was developed to purify larger volumes of water. The LifeStraw portfolio has continued to evolved to include the high-volume LifeStraw Community purifier for institutional settings like schools and clinics (introduced in 2013), the LifeStraw Go refillable water bottle (2014) and LifeStraw Mission, a high-volume, collapsible bag ideal for campsites, group hikes and expeditions launched in 2015. 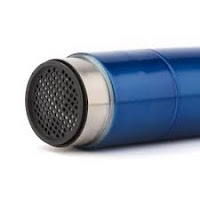 Today LifeStraw is used in water products and projects in more than 64 countries around the world...but that’s just the beginning. Inspired by the positive health impact LifeStraw can have, Vestergaard will continue to innovate, introducing new LifeStraw products to meet a variety of needs and initiating equally innovative programs to bring them to the people who need them the most. Vestergaard does business to improve the health and quality of life for people across the globe. The LifeStraw Follow the Liters program, launched in 2014, would contribute to this goal. Under this program, a portion of the proceeds of consumer sales for any LifeStraw product anywhere in the world, goes toward the purchase of LifeStraw Community purifiers which are distributed to schools in developing communities. As a result, each consumer purchase provides one school child in a developing community with safe water for an entire school year.

If you are someone who ever leaves their house, you are a customer for LifeStraw. Using the straw (from a water bottle, stream, puddle or pond) will provide you with clean and safe drinking water anywhere you go. This award-winning filter is a must have for you if you travel, hike, hunt, or camp, or if do anything else significant in the outdoors. It's also something you should have on hand in case of an emergency and it is an alternative to iodine tablets and other purifiers that are too bulky to carry around and it should be in every home and every vehicle. The LifeStraw is only 2 oz. and it filters up to 1000 liters of contaminated water without iodine, chlorine, or other chemicals. It does not require batteries or electrical power. It removes a minimum of 99.9999% of waterborne bacteria, 99.9% of waterborne protozoan parasites (including Salmonella, E-coli, Giardia and Cryptosporidium, and filters to 0.2 microns. LifeStraw surpasses EPA filter standards and is BPA free, containing no chemicals. Every person should own a LifeStraw! 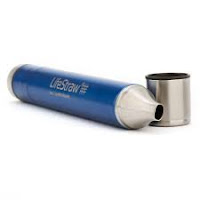 The LifeStraw Steel uses a replaceable activated carbon capsule to reduce bad taste, chlorine and organic chemical matter for up to 100 liters. Its sturdy and durable design also requires to electrical power or batteries. LifeStraw Steel has all of the features of the LifeStraw with the addition of using food grade stainless steel that meets US Food and Drug Administration regulations and standards.