Netgear ORBI: The WiFi That Every Home Needs... Are you frustrated with your current WiFi situation. Do you suffer from dead zones and slow-as-molasses speeds. No more frustration or suffering with Orbi ...


NETGEAR's family of Orbi Tri-Band WiFi systems is designed for a broader range of homes and budgets. From the Basement to the Backyard, the Orbi WiFi System with innovative Tri-band WiFi now includes two new offerings for smaller to mid-sized properties under 5,000 square feet to enjoy better WiFi everywhere!

Maximize the WiFi speeds are you are paying for, to every inch of your home, and beyond!

NETGEAR is the leading provider of home networking that powers today’s smart home, is expanding its multi-award winning Orbi system.
As customers demand better WiFi throughout their home, these new Orbi systems address a broad range of home environments, from apartments and lofts to single family homes and sprawling estates. NETGEAR is also introducing new form factors for Orbi that provide even more choice of style and flexibility of WiFi placement so more customers can enjoy WiFi on every inch of their property. Orbi is a driving force behind the growth of Home WiFi Systems, and these two new systems demonstrate NETGEAR's commitment to and leadership in the WiFi System category. 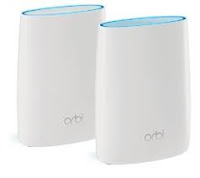 As the inventor and market leader of the WiFi Range Extender category, NETGEAR knows that a significant percentage of consumers (they know their market very well) prefer the flexibility of a wall-plug form factor, especially when placed in common areas such as hallways and kitchens. The new RBK30 Orbi Tri-band WiFi kit with its wall-plug satellite is particularly well suited to address this segment of the market. 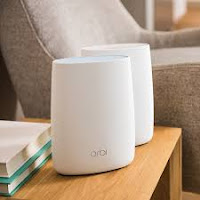 Lauded for its innovative design and engineering, Orbi by NETGEAR has a unique, industry-first Tri-band architecture with a dedicated 5GHz wireless connection between the router and satellite, which provides both reliable WiFi coverage and maximum internet speed throughout your home with a single network name. These new Orbi Systems all deliver industry-leading 802.11ac AC2200 WiFi speeds up to 2.2Gbps*, so you can enjoy seamless WiFi everywhere in your home and around your property, without dead zones – from the attic to the basement, patio to garage, front yard to back garden — even while streaming 4K HD video content or other bandwidth-gobbling multimedia.

“Today, WiFi is now considered to be as critical as any other home utility. You would not be willing to settle for sub-par electrical coverage or inadequate plumbing and you should not be expected to contend with a wireless network that does not deliver the coverage and performance you need. With this new expanded portfolio of Orbi Tri-band WiFi systems, we are introducing solutions to provide the best WiFi for an even broader range of households. We believe that no one should be without the best WiFi experience available,” said David Henry, senior vice president of home networking devices for NETGEAR. “With our patented industry-first Tri-band WiFi provided by the Orbi WiFi systems, you can now enjoy optimum WiFi performance even at the furthest edge of your property. So, go ahead and binge-watch the latest streaming series in the basement TV room while the kids are enjoying rapid-fire online gaming from their room upstairs.”

“Each of these new Orbi systems with AC2200 WiFi are faster than competitive products with legacy AC1200 WiFi,” continued Henry. “Furthermore, all Orbi home WiFi systems are Tri-band versus the competition which are dual band mesh. Due to the use of the innovative Tri-band technology, multiple independent reviewers and testers around the world have proven that Orbi WiFi systems deliver far superior performance for more simultaneously streaming devices.” 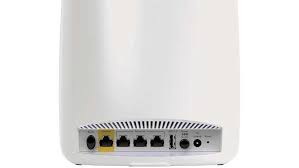 Innovative Tri-Band WiFi system providing combined WiFi speeds up to AC2200 on the Orbi Router and Satellite creates a dedicated wireless connection between the Orbi router and the satellite or satellites, similar to a wired Ethernet connection
Simultaneous 2.4GHz and 5GHz WiFi on the router and satellite for connecting to your home devices all under one WiFi name;  Easy setup with a single and secure WiFi network; Orbi comes pre-paired and configured and works with your internet service provider (ISP) right out of the box; Advanced WiFi security with automated updates, WPS-protected setup, 64/128 bit WEP; WPA/WPA-2 PSK, WPA/WPA-2 Enterprise; Auto-updates of firmware available to ensure you have the latest security and software updates; Satellites extend WiFi signals and maintain one network name (SSID) for the entire network (2.4 GHz and 5GHz WiFi bands) throughout your home for seamless connectivity and roaming; Guest WiFi network—easily set up separate and secure Internet access for guests; 4 Gigabit Ethernet ports on the Orbi router and on the satellite (wall-plug satellite does not include Ethernet); Support for advanced router features such as IPv6, dynamic DNS, port forwarding, parental controls, Virtual Private Network (VPN) termination and access point mode; Easy installation using the browser or Orbi Mobile App for iOS and Android

NETGEAR is also offering the new satellites for individual purchase for cases where you would like to add greater range to an existing Orbi WiFi System. You can add up to 2,500 additional square feet of range! What more can you ask for?